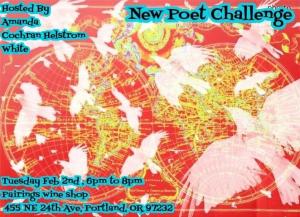 February 2nd, 2016, on a Tuesday from 6pm to 8pm I will be participating in the New Poet Challenge at Pairings Wine Shop along with a new poet of my choosing.

I frequently attend the Friday night open mic at Homebase from 7 to 9.

I will also be frequently attending the musical and artistic open mic at Sound Grounds most Thursdays from 7 to 9.

Open Mic Night, most Monday nights, at The Goodfoot

To view a very thorough and magical calendar of poetry-related events in the Portland Area visit the Oregon Poetry Association!

Poetry from an English Hart